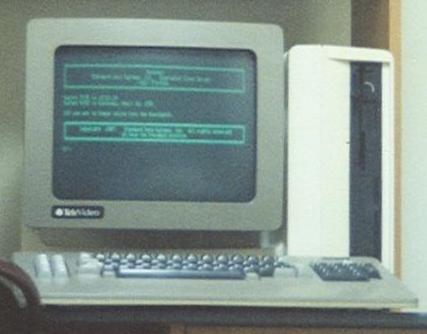 From around 1983 to 2005, my family had a great computer that I wish we still owned: a TeleVideo Tele-PC Plus TS-1605. What I loved so much about this was how it had a built-in, monochrome monitor. I liked how it was all one unit except for the keyboard, and seeing it set aside and unused after my dad got his Packard Bell, I thought it’d make a great personal computer. So from 1999 – 2005, I did in fact use it from time to time. In 2004, I used the Packard Bell to transfer files onto 5.25” floppy disks, and for the first time, the TeleVideo had some DOS games! In September 2005, I made the mistake of giving away this great computer.

I probably began to miss the TeleVideo a lot in the summer of 2009 when I got hooked on old computers again. I just loved the idea of that green monochrome screen and wanted another computer like that – and would even settle for an IBM PC 5150. In 2011, I learned that I could sometimes find old computers at thrift stores, but sadly, as of December 2012, the closest I’ve been able to find there is an IBM PCjr.

Since 2009 or 2010, I noticed two eBay auctions for a TeleVideo TS-803. One was a CP/M model, and the other was an XT with a 10 MB hard drive. I had considered buying it but was rather expensive. But in November 2012, I was somewhat obsessed with the TeleVideo again and figured that I had better get one soon, as I feared that Peak Oil might eventually make online buying impossible. So I finally purchased the XT version of the TeleVideo – only to find out that the model had no video. I settled for the CP/M version instead.

On December 3rd, I was very anxious. I spent all day waiting for UPS to deliver the TeleVideo. It was such a unique computer, and I had a lot of nostalgia for it and didn’t want anything bad to happen to it. I grew more and more frustrated and worried as the day drew closer to the end, and UPS still hadn’t arrived. By around 5:00 or 6:00, I decided that UPS was not going to show up that day since it was getting dark, and I felt really mad and frustrated. But sometime after 6:00, I saw and heard a big truck going into a cul-de-sac. I grew hopeful. Was it UPS? Sure enough, after the truck left the cul-de-sac, it stopped at our house! A man got out of the truck and handed me a big box! I was very happy, and once inside, I unpacked the TeleVideo TS-803. For the first time in over seven years, I was reunited with another TeleVideo. And this time, I will try not to get rid of it. I also don’t plan to use it much since it is an old computer and don’t want it to get broken. Indeed, I am very glad I have another TeleVideo.